We are residents of the Wrangelkiez and we are strongly opposed to the exclusionary and racist police controls in the neighborhood. We are a diverse group: Some of us have lived here all their lives, others moved here only recently. We are in different life situations, belong to different age groups and pursue diverse occupations. What unites us is the daily observation that the police in Görlitzer Park and Wrangelkiez use the unlawful practice of racial profiling and often violence, some of which we ourselves are affected by.

We know about the

different opinions in the neighborhood. We see the existing conflicts linked to issues such as gentrification, homelessness, the asylum and drug policy, and the aggravation of social problems by Corona. We are also annoyed by some things in our neighborhood. But we know that police violence does not help against poverty, against work bans for asylum seekers or against high rents and displacement. Repression, criminalization and displacement by the new focal point unit of the police therefore cannot be the solution. We are against a reflexive call for more police, and for a reconceptualization of alternative ideas for solutions.

We want to live in a neighborhood of solidarity, which does not simply react to conflicts and contradictions with police and exclusion, but rather searches for solutions together. That’s why we have joined forces to add some perspectives and ideas to the discussion.

At the beginning of 2020, police controls in Wrangelkiez and around Görlitzer Park were once again massively increased. Almost exclusively people of colour / black people are affected by the controls – regardless of what they are doing or where they are going. For example, pupils from a language school in the neighbourhood repeatedly report that they are being checked by the police on their way to class. 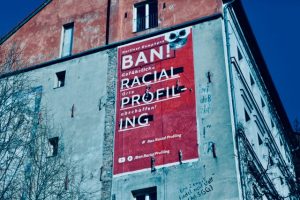 is deployed in so-called “crime-prone” locations is responsible. Seemingly under the guise of coronavirus prevention and to prevent crowds from gathering, actions are primarily being taken against people of colour / black people. This practice is not only racist and discriminatory. Racial profiling is illegal by law!

As for the problems in the neighbourhood, the opinions of residents and visitors differ. While some are annoyed by the growing tourism, others are bothered by the sale of drugs in Görlitzer Park. While some complain about an alleged increase of pollution in public spaces, others are faced with rising rents and displacement. Different perceptions and interests collide to shape everyday life in the neighbourhood. This is nothing new in itself. For some time now, however, we have noticed an increased presence of the police who are carrying out arbitrary, racist, and violent identity checks. Not only does this add more social tension, but it is also perfectly clear that such measures do not help solve any problems. On the contrary, the problems are increasing. This has not improved the situation for anyone.

At the same time, the tabloid press produces images that fuel misconceptions about Görlitzer Park. People’s economic problems are practically ignored. For us, however, it is clear – if you want to seriously tackle social problems, you have to create social opportunities for everyone, instead of criminalizing people and thereby constantly exposing them to new threats. For years, the Senate’s law-and-order policy has ignored the realities of life in the Kiez. These policies have long since failed!

What can you do? 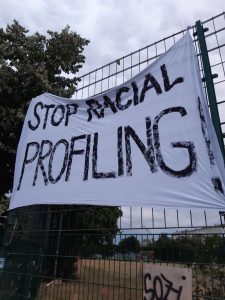 Copy and distribute these flyer. Get creative! Make banners and signs and hang them from your windows or balconies. Don’t look away when you see racist police controls and say aloud what you think of them. If you feel alone and powerless, speak to people around you. Take videos / photos and send them to us with details of the date, time and place for documentation purposes.

Keep your distance, behave in a de-escalating way, and document that too. Although it is legal to observe and film/photograph police activities, police officers are reluctant to have their racist behaviour seen and documented and often use flimsy accusations (obstruction of police measures, coronavirus prevention, resisting arrest, etc. ) against observers.