What is Racial Profiling?

When the police controls based on skincolour and ideas about ethnicity, religion, or national origin instead of individual’s conduct or objective evidence.
In and around Görlitzer Park, Görlitzer Bahnhof, Kottbusser Tor, Warschauer Brücke,
Alexanderplatz, parts of Hermannplatz, parts of Rigaer Straße are special „danger zones“(kriminalitätsbelasteter Ort). Here the police can control you without a specific reason. 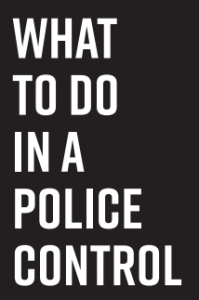 If you are arrested you only have to give the following information:
Name, date/place and country of birth, nationality and registered address. They have to tell you the reason for the arrest and explain your rights.

Don‘t say anything else and don‘t give further details! At this point in time the police could accuse you of anything and use what you say against you. After being arrested you are legally allowed to make a phone call.

If you are arrested or watching arrests you can call a lawyer or contact the emergency number!

It is good to remember the number, (because the police will maybe take your phone).
They will document the arrest, give information and contact lawyers. The telephone is not always answered. Leave your name (spell it), where you are, and what you are accused of and if possible a phone number on the answering machine. (Leaving a message on the machine does not count as a phone call. So you are allowed to make another call!)

You are allowed to refuse to say anything to the police as well as in front of the public prosecutor or the court. Don‘t let yourself be intimidated!

Sometimes the officers threatens with deportation or they promise to release you if you tell them anything. Do not believe them! In NO case sign a statement!

If things or money are taken from you, they have to give you a protokoll or receipt. Do not sign this receipt. Never pay anything without getting a receipt.

In case of a Platzverweis file a complaint afterwards with a lawyer.
If you are injured or if you need other medical care, a doctor has to be allowed to take care of you.

If you are not released you have to be presented to the committing magistrate (Haftrichter) or there will be a summary trial (Schnellverfahren). This has happened at the latest the day after the arrest before midnight.

It is your right that an translator is present there. Insist on this!

If you have experienced police violence, write down your experiences, note witnesses, time and place, ID numbers of the police etc. and get in touch with KOP or Ombudsstelle.

Contacts that could be useful

EACH ONE  (free of charge ) offers advice to Black, African  and Afro-diasporic people in Berlin in all cases of discrimination